The Early Days of Our Pandemic

I remember the days before it began. A time when we had the leisure to wonder whether we were overreacting.  The reports were emerging overseas, and while scattered cases had arrived in the US, there were rumors that everything was being contained, though thousands of deaths would soon make their way from the coasts. By the time the first case was reported in Michigan, I cancelled my classes and wrote what felt like a paranoid email to my students, then to the English Department, then to the Dean: I was cancelling class for the week and staying home for the safety of all. I spent the rest of the day texting friends and calling relatives to let them know I’d begun isolation.

For those of us who were early adapters, it was easy to feel like we were being overdramatic. Soon, though, new language emerged: The Flattened Curve, Quarantine, Lock Down. They were words we never imagined using outside of science fiction. Social Isolation became a new kind of solace, a way to ease the private chaos we were all collectively experiencing. There were those who still gathered on Florida beaches or threw Corona Parties. We saw their faces on our screens, the young and clueless, telling us they weren’t going to stop living their best lives. And later, we saw the adults with their semi-automatics, American flags, and MAGA hats protesting for their rights to get a haircut. Their impeached president reported it wasn’t any worse than the flu.

But who was listening to him anyway?  His press briefings were as useless as reality TV, and we turned instead to the governors of major cities and the prime ministers of distant countries who seemed able to admit the truth: That the numbers were doubling every day; that death was arriving quickly; that they, too, had mothers and fathers and children they loved; that they were frightened. The videos from quarantined Italy emerged. From windows, human voices were lifted in song, and for a moment, a melody floated above our cities of fear, and our throats opened their clenched fists. A man played a trumpet solo on a balcony above an empty Italian street, and we all wept. How beautiful humanity was. Oh, God.

Everything seemed capable of bringing tears. At night, when my wife and I held one another, we wept together. Our fear had suddenly made everything sacred, every moment holy and frightening, the world vibrating with death at the precise moment that it made our lives meaningful again. The universities were closed, the schools, then the businesses. There was only each day now, the sun rising, and questions of what to do with all this time at home alone.

In those first weeks of lockdown, the planet seemed to be resting. The smog had disappeared, the Ganges no longer filled with plastic, dolphins returned to the waters of Italy, and whales took back their oceanic passageways. Our cities were being visited by coyotes and wild flamingos, and the sound of crickets could be heard in LA. The wilderness was returning, the Himalayas finally visible at a distance, and I wondered if perhaps we were being given a last chance. The pandemic was a gateway, Arundhati Roy voiced elegantly. It was our choice, she wrote, whether we walked through the portal dragging our prejudice, hatred, and dead rivers with us or walked through that portal without them.

The pandemic, in its global time-out, bought clear revelations of gross inequities, broadcasting the disasters of our economics so clearly that it seemed there was no choice but for our civilization to evolve. There were truths arising from the silence. Some started to ask better questions. Did everyone have food? Water and shelter? A paycheck? The cases doubled every day; we were told about the numbers of hours the virus could live on surfaces; the number of feet we had to keep between one another; the rising toll of death. We scrolled through well-written articles, hoping the next one might admit the truth that we’d been waiting to hear: That the world we knew was no longer the same. That none of us had a clue where we were headed.  That we’d finally secure food, shelter, and water for everyone. The heroes, as they’d always been, were our doctors and nurses, our postmen, garbage men, produce drivers, farmers, and field workers. In city after city, we watched people connecting across vast distances on zoom, across balconies, through music. Listen to the wealth of all that love. It seemed we might finally be learning. Then we began fighting about toilet paper.

Outside, the earth was beautiful that spring. The swans and geese, magnificent in their return, were completely calm. The sky was so blue. Flowers pushed their way from the soil, small universes of awe that turned my backyard into a cosmos of hope. The forsythia bloomed in ropes of vibrant yellow, and purple hyacinth emerged from the ground filling the world with nectar. Every sunset seemed miraculous against the darkening sky. I was fortunate to have a backyard, and my family and I built a bonfire, piled it high with branches, and the setting sun lit our faces with fire, our bodies cool with early spring. In our windows, egg cartons were filled with soil, the first shoots for our garden emerging. Other shoots were making their way through the darkness as well. I’d always wanted to sing more, to cook, to be quiet for a day. My son, who at seventeen, I’d begun to see less and less, asked if I wanted to go for a bicycle ride. And later that night, we sat together at the dinner table and talked. Somehow, I hadn’t realized what a magnificent man he’d been turning into. Afterwards, he invited me to play a video game, and we stood with our heads sheathed by VR goggles, attacked by zombies, completely terrified. Perhaps, in this silence, another life was arising, the one I’d been meaning to live but was always too busy to have time for. It was hard to recall what the old world was like anymore. All I remembered was that we were all so very, very busy. Longings become simpler: to see family again, to listen to friends’ voices ringing out across a room, to wrap our arms around those we loved. When I logged on to teach class, the first question I asked my students was How are you all? Is everyone okay?  They were the questions I should’ve been asking all along.

I’ve written for decades about dystopias, but I wasn’t prepared to live in one, or for how the virus would, by necessity, force us into our homes, onto our screens, and away from our loved ones. Regardless of how apocalyptic my fictional landscapes might be, there was always hope. My characters reached out to one another, received embraces from neighbors, put their arms around their loves. Who would’ve guessed, in this new world, to love one another would mean doing the exact opposite? In this new solitude, I lit candles and prayed to an unseen world. Please, keep those I love safe. Please, let the cure come soon. Please stop all these deaths. It was an unknown future now. I had morning light. I had the voices of those I loved who I could speak to by reaching out. I had this life with all its vulnerability, its compassion, and its new, terrible hum of fear. It seemed that perhaps our futures had been returned to us just as quickly as our past had been taken away. Perhaps, from all this darkness we would write the stories of a more beautiful civilization. I still hope we’ll prove ourselves worthy of such a future. 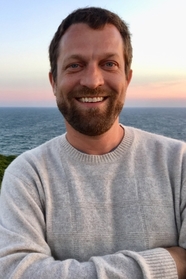 Alexander Weinstein is the author of the short story collections, Universal Love and Children of the New World, which was chosen as a New York Times Notable Book of the Year, and a best book of the year by NPR, Google, and Electric Literature. His fiction and interviews have appeared in Rolling Stone, World Literature Today, Best American Science Fiction & Fantasy, and Best American Experimental Writing. He is the Director of The Martha’s Vineyard Institute of Creative Writing and a Professor of Creative Writing at Siena Heights University.