James Thomas Hill, 72, was a beloved family man whose presence was sought out by many. Born and raised in Toronto, Canada, James worked as a physician in Shreveport, Louisiana. His family knew him as a gentle, loving man. “He used to give great big bear hugs,” said his niece, Jessica Marostega Bob. “You could talk to him about things. He was reassuring, and he would always say, ‘Remember, I love you.’”

James contracted COVID-19 and passed away late on the night of August 5, 2020. His family believes that his death was borne out of negligence and disregard for his life rather than simply bad luck. Incarcerated for more than 13 years at Rivers Federal Correctional Institute in Winton, North Carolina, he was released on April 15 and detained at Farmville Detention Center in Virginia under ICE’s mandatory detention policy while he was awaiting deportation. According to his family, James reported that Farmville was “the worst place he had ever been.” Administrative setbacks delayed his deportation for months; he was scheduled to finally fly back home to Toronto on July 9.

The three-month postponement proved fatal. On June 2, Farmville accepted 74 people who had been detained in Arizona and Florida, 51 of whom tested positive for COVID-19. As it turned out, the migrant transfers were not a rational response to any overcrowding in Arizona and Florida, but they were rather a pretext that the Trump administration used to transport ICE “special response teams” to Washington, DC to police the Black Lives Matter protests. The virus began to spread rapidly at Farmville, infecting up to 90% of the population at the facility. James told Jessica that he was very scared due to the dangerous conditions and his age and that “it’s not a matter of if I get COVID, it’s when.” Just days before James’s flight, he began to experience a fever and breathing issues. His travel plans delayed, he was hospitalized on July 11, when his test for the virus came back positive. Four weeks later, he lost his courageous battle against COVID-19. 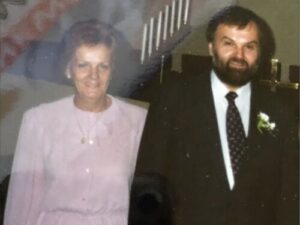 For James’s family, his death came at a time when their reunion had finally become tangible. Jessica had helped to prepare a room for her “Uncle Jim,” whom she said was like a father to her, at the family’s home in Toronto. Family pictures, a Father’s Day card, fresh clothes, a newly-renovated space, and his loving family — all of this and more awaited James upon his arrival in Canada. His family’s excitement was obvious: “We were all as a family looking forward to him coming home and embracing him,” Jessica said.

“All these years he was so looking forward to being back, and then through their negligence they let him die,” proclaimed his nephew, Douglas Hunt. He said definitively, “It is a story that shouldn’t have happened… He begged them to protect him because he was older … and they ignored him.” Jessica added, “To have him leave this world like that is a tragedy.”

We join James’s family in their anger and their grief. We mourn the life of this invaluable man, whose life was unnecessarily made victim to COVID-19 and to the U.S. carceral system.

This memorial was written by MOL team member Eliza Kravitz with information from reporting by Ellen Mauro of CBC, Tu Thanh Ha of The Globe and Mail, Sabrina Moreno of Richmond Times-Dispatch, Nick Miroff of The Washington Post, and a press release by ICE.