Three parts, but to be continued...

And the people had to leave

From the streets , the monuments
The beautiful cathedrals rising in the skies
The temples with the incense and the flowers
The museums with their walls heavy with art
The planes they had made to disappear into horizons
The boats they had made to glide on oceans
The fifteenth century  pubs with the hog’s head on the fireplace
The 2020 bar with its waxed floors and soft rock
The nightclubs that writhed, the libraries that whispered
The mighty busy stations with trains that trundled
Up and down green and pleasant lands
The theatres where they had watched love and hate and anger and music
The shops they could buy anything they wanted and things they didn’t know they wanted

They had to leave it all

They had to disappear from the outside
And go back to their homes, stay inside

Then inside their  homes…. (but what if one doesn’t  have one – where do the homeless go ? )

And then once inside
They worried, they cleaned, they complained
Governments which did nothing, or did too much
They shopped, they hoarded, they cooked, then mostly they worried
Even if someone somewhere  in a country far from theirs
Choked, helpless science staring,  the lungs filling up as if with thick clay,
They checked numbers of the dead every day
They thought of those they’d liked but hadn’t  said, or met
As they stood further away from each other, they missed the touch of skin
They took to the virtual world called each other just to see , even on a laptop screen
They planted, robust trees bursting through, they cared like they had never before
They thought of the old, the doctors, the nurses,  the homeless, the heroes
And  the homeless, they  rose! Suddenly the streets were free and theirs, they were taken in
they could walk in to the grand empty edifices, we are all together in the same skin

Yet somewhere in wet markets, animals still raged , somewhere a snake, a pangolin uncurling
The devout worshipped, they prayed, they clapped, looking at others do in a continuous frenzy
Forgetting that in Nature’s world, the order is not of a benevolent mother
In the animal world, only  the fittest survive, when we don’t live why should you?
Why should revenge not come to you, in the air you breathe, in the lives you lead?

The people saw all they had built was nothing, all that they were proud of was not helping
They had to go back, back to lifestyles years ago, reinvent, create, repurpose
They had to rethink, inside their homes they had to think long and deep
If suddenly everything is taken away-
What do you do. Who do you become. Who is with you. Who is you. You.

And this now we are in, we have come far haven’t we?
While science moves fast in strides, assures us of inventions
Here the tests which we didn’t have before, and the vaccines
Of which we have had double doses, and even a booster
So we are out there in the open, we are in the shops, we are in the museums
And we are meeting those we haven’t for months, and there the holidays, the  trips
And there are all the moments which have been lost, and which must be made up
New experiences stitched into tapestries,  woven web of  memories, new songs, new music
We are trying to imagine we are back there, right there before isolation and quarantine
LFT tests,  and pandemics became words on our lips
But shadows remain, wisps of those who were with us and have gone,
lost their breath in hospitals and homes and all alone
Ghostly glimmers remain, and stories of loss and grief are told, retold

A reminder we cannot be there yet, perhaps never, as once again the news talk of yet another strain
And countries still make their own rules, some blame, some crow, some isolate yet again
We strive , we hope we  wish yet still  we forget the world is an  interconnection. 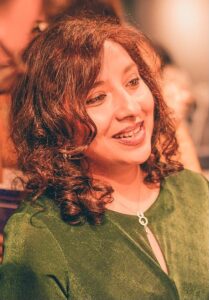 Mona Dash is the author of A Roll of the Dice : a story of loss, love and genetics (Linen Press, 2019) winner of the Eyelands International Book Awards for memoir, and very recently, Let Us Look Elsewhere (Dahlia Books, June ’21) She was recently commissioned BBC Radio 4 Short Works. Her other published books are A Certain Way, Untamed Heart, and Dawn-drops. Her work has been listed in leading competitions, published in international journals and more than twenty anthologies. A graduate in Telecoms Engineering, she holds an MBA, and also a Masters in Creative Writing (with distinction) She works in a global tech company and lives in London.