The World in My Solitary Veins

Often I have described my heart
As the sky. Wiped with a washcloth.
Every picture I took during sun sets
And the red orb (Fire! Flaming!) fixing
Us with daily tasks, I’ve breathed slow.
Now, the breaths come even slower
The clouds still tease. I spot shapes
The way I did as a child: Elephants
With the longest trunks ever, furry
Kittens drinking from the sky saucer,
A little girl running after a ball, and
Crocodiles in snare. Frenzied for
Action. At times just soft strokes.
Now the shapes come even fainter.
We were taught to find colours in
The sky. Blue from airy old scars
Spread over. As though my dreams.
Until I realised dreams bled nothing
Only reality did. The way my dad’s
Head bled when he had the stroke
And fell down on the wide terrace.
Often the vast screen up above
Turns into the valley of my skin
Dipping with time, tingling hard
When love’s sudden cackling birds
Etched that perfect arch of a V.
Now even while the sky runs free
With no smoke prints of aeroplanes
Of our rootless journeys, I feel
There’s something dripping off
Of the blankness, of its pale gaze.
It is you, it says. I ask, am I?

Did I know
The texture of water
Before I felt it on my palm
When I rolled my days with sweat
Drops? Did I know what flutters
Each drop contained before
Dusk, before drawing curtains
Over the atrium of light.
Did I soak
My sleep with the ripples
On the horizon. Faint terraces
In the haze of summer afternoons,
Browned grass in the heist of heat
That wants water, only water.
The moment when I had dipped
My toes into a mountain river
Or when I tried seeing inside
The belly of a pond: that epiphany
Doesn’t leave. Even in sorrow
And the joy of seeing an odd light
Scooping us in its fluid offering
I did not know that my own lone
World of solitude swims within
This body I inherited from decay.
A body I drink sip by sip. Molten.

Truth be told, I’m tired seeing
Pictures of anointed flowers,
Well-manicured private gardens,
Common birds at uncommon hours,
And dishes dazzling like diamonds
On people’s tables. I see the same
Flowers, the birds, the plates
Glittering on my curve of daily-ness.
An unsettling mirage on the senses.
I want to see the unseen: what
Of those things invisible, where
No one touched, no one was seen,
And no one spoke at all to anyone?
The face a mask, the eyes
Are probes, and the tongue
A scanner for all words unsaid.
Perhaps this earth will imprint
Itself all that on my belly, feel
The sag each muscle layer records
When we measure our own ailment,
As though recurring seismic circles.
Perhaps the summer-ridden soil
Will feel the bodies gone cold
In its wraps, while we watch
Buds flowering, unswept petals
On landscapes like heart-aches.
I want to bend down and once,
Just once, touch the ground.
Perhaps it’s all imagination. But
It’s also to atone for the lack of touch
We’ve inherited. Along with it
The sudden eye for flowers, trees,
And the tedious world in mourning.

that absinthe any more —

as much these sudden roads needed our sap

once through the isolation, their sleep.

Our love covered πr2, nothing greater would suffice.

Come through that crack in the radius, you spoke –

across the blueprint of the fences, barricades

in the torn alley where civilisation is distilled.

my hands blessedly drunk, our lips just on lips.

The belly of the earth is split open

behind my pristine (or so I think) terrace,

coming out of their shells of starvation.

That ancient act of food gathering—

but they still huddle hungry inside a shanty tarp.

A woman in an orange sari fills a broken bucket

only one man shouts, his spotless shirt, tongue whiplash.

When I say ‘pain’, he has already turned to the middle

page of The Second Sex by Simone de Beauvoir.

When I say ‘soledad’ means the sky cannot hold alone,

he reads aloud how in Haiti people are left to rot;

tearing our own sinews, snarling at the motorcades

in the forest of the night, we, our hearts gone concrete.

Take my bones, take and cook them

Take the pores and seal them with hope.

Take the tarred roads grass-lined by my hair

dye them in your chemicals, faraway smoke stacks

all my fingers and erect the traffic lights anew.

Make my eyes your morning once, then evening —

gem stones we will want to eat in vain. Take

this body of the woman who left, to come back.

To Hathras, to Hathras, bellowed the guy at the bus—

I was given a god to love. And that shibboleth fell

to the lilt of my heart-flower, wild wild grass –

take my tongue that burns: what’s death to us?

Ask yourself – have you been breathing through

Your mouth or your nose? Also, see the smell of rain.

Ask yourself – what unknown hands will help by

Your side when you switch beds, the linen stark white

Bland like the ceiling above, while the IV pipe shakes.

Ask yourself – did the ambulance cries erupt high and low

In your dreams. Slow tears of those almost-gone, in pain.

Ask yourself – will you still taste, long for the same way

Your overpasses, pillars, walls, slowly crumbling in their seams.

One whole year of lovelessness

One dream I had last night is of you

A curtain flying in the wind, it’s a sea side

I taste salt from your roots and you too slake

Your thirst with the aroma I shed from my crevices

We talk food we didn’t eat and love over heat

From our mouths. Outside, the city still waits like a hunter’s trap.

The lone garlic pod is a monk

sitting over the kitchen counter.

A silent oblong ascetic. It chants

of its absolute indivisible

but steady escalation on

the path of what we humans

call life. It is draped in white

because, no, not a shroud,

it is just the ample tenacity

of the alabaster form. Stoic

and firm on the cool granite.

What seems slow to the eye

is actually a grand resolution

that past all ages of the earth,

this pod will cradle in its inside

our capers, apathy, and pride.

We’ll write ditties to the moon,

call our sighs poems. The pod

will shake its head. It’ll preserve

its sharp cynicism for harsher times ahead.

The day, each day, is itself.

The way it dawns and

to the brink of folding in.

We think it is in happiness

that it trembles on leftover

that we make. All the while

We want a clean sky, air

smelling of detergents on

our hands. The spinach wilts

with too much attention.

the terrace to find us tremble.

before the birds are aflutter.

Whose happiness is it really,

The day, the night, the vast

space with stars, our stares

underwear, and all knick-knack

another blatant ode to happiness.

It began with examining specks

lying over the floor. As if gems.

Dead bits of ourselves showcased.

in its limitlessness kissed by death.

remaining off limits in its morphology.

But it began with gauging each square

foot of the space we tend to step on.

How much of this air? How much vacuum?

What inches accord us our coordinates,

were the questions. As against each

footprint we left on the wet surfaces

of our dreams, life became microscopic.

Measure the limits of life in coffee cups

the poet said! You did too. When alone

we tried saying loving words from

another era in history. You showed me

how to hold a butcher’s knife right. Left

me with my own throbbing heart.

It began with dicing time, love, life, as

they died. As sparks in flight. All night. 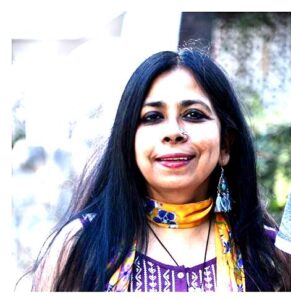 NABINA DAS is a poet and writer based in Hyderabad. Her poetry volumes are Sanskarnama (2017), Into the Migrant City (2014), and Blue Vessel (2012). Her new collection Anima and the Narrative Limits (2022) is from Yoda Press. Her first book of translations Arise out of the Lock: 50 Bangladeshi Women Poets (2022) to commemorate the golden jubilee of Bangladesh has been published from Balestier Press, UK. She is also the author of a short fiction collection and a novel. Nabina is the editor of the Red River Book of Poetry of Dissent (2021), and co-editor of 40 under 40: Poems of Globalisation (2016). Nabina teaches Creative Writing in classrooms and workshops.