During quarantine, looking for new spaces for poetry, I minted some NFT poems. At that time I was one of the first in the world doing so. I achieved some success in those worlds thanks to Cryptopunk poetry and I subsequently experimented with other forms.
This in particular is an example of “code poetry”, that is, poetry inserted inside a code, specifically the HTML code, the standard markup language for documents designed to be displayed in a web browser.
The poem is a tribute to Fibonacci, who replaced Roman numerals with the Indo–Arabic numeral system in the medieval West. But Fibonacci was also and above all the discoverer of the so-called “Fibonacci sequence”.
In the Fibonacci sequence, each number is the sum of the previous two numbers. The relationship between two consecutive numbers of the sequence is the so-called “golden ratio”, considered the secret of Beauty, known and applied in all arts.
The relationship between two sides of the rectangle in which the poem is enclosed (610×987 mm) constitutes a “golden ratio”.
In addition, the number of words in each verse, in both languages, traces the Fibonacci sequence: 1, 1, 2, 3, 5, 8, 13, 21.
The poem is written in my mother tongue, Italian, which is also the language of Fibonacci, and translated into English. Through the dialogue between these two languages and the HTML language I created translingual rhetorical figures.
They are to be discovered by comparing languages.
This poem is guaranteed by an NFT in the Opensea platform, but it is not for sale. 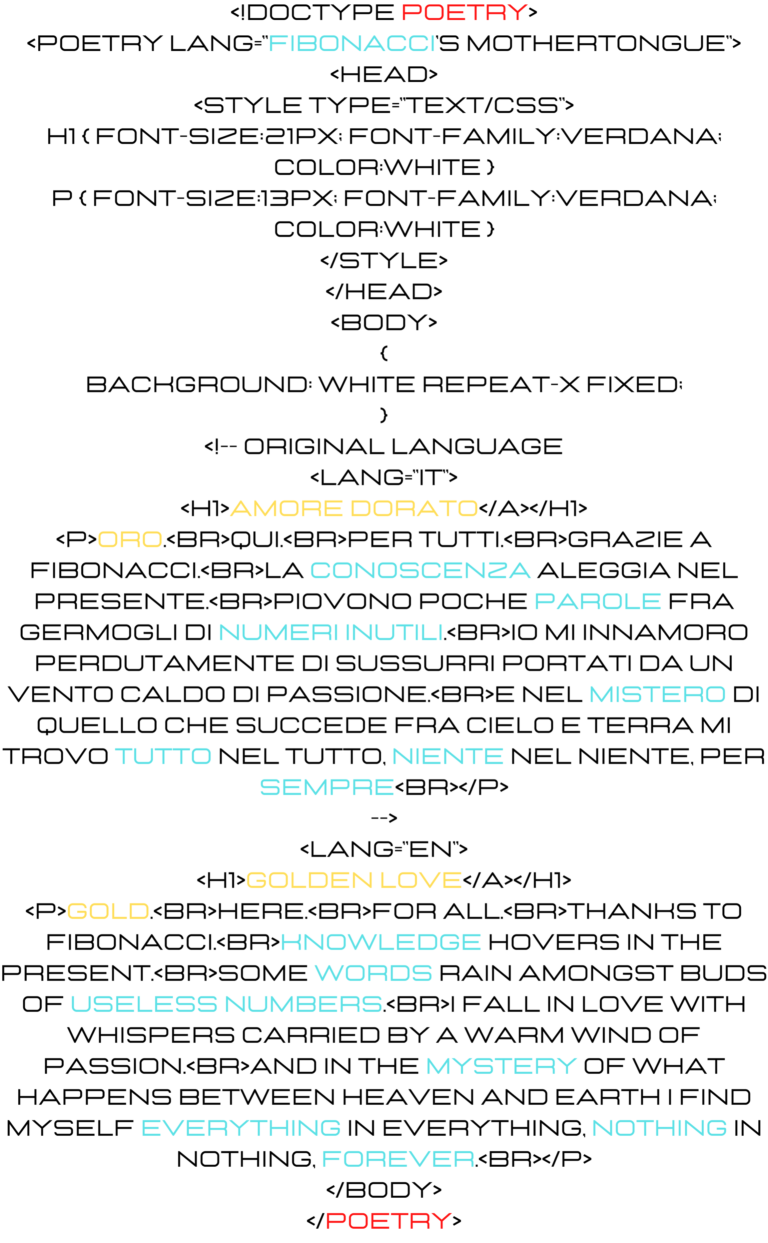 Paolo Gambi is an artist, poet and performer focused on poetry as a contemporary tool of artistic expression. He has published about thirty books, some have been translated into five languages. His artistic research revolves around the word in its relationship with mystery, psyche and technology. He brings poetry into new spaces. He is a pioneer of bodypainting poetry, he writes poetry on the matter and stages it. He is one of the first in the world to have minted NFT poems. He founded Poetry Renaissance, one of the main networks of poetry in Italy, present in various countries.