At the very beginning of the first quarantine in Italy I felt the need to build bridges of beauty between my loneliness and that of other people who shared that strange destiny with me. So one night I went live on Instagram and I started reading poems, like a lot of people around the world did. Some verses were mine, others were by great authors of the past. I wanted it to be a simple way to fill with poetry those strange days, clouded by the fall of the many certainties of social life. And I invited those who wanted to read poetry with me to do so. Immediately someone came forward, reading their own poems and verses by authors of the past. And at the end of the show, I felt good. I felt like I did something good, I felt I did what I had to do.

A verse by Walt Whitman emerged immediately, as a companion of our adventure: «and you may contribute a verse».

That’s what I felt I had to do.

So every night since that day, I went live, creating a space for poetry, a sort of an open mic that challenged the virus, quarantine and geography.

The first night we were few friends, the second a few dozen, the third a few hundred, up to reach thousands and thousands of people, all eager to share poems.

And all this happened in Italian, in a country, Italy, that in recent decades has lost the taste for poetry.

Only one rule broke the artistic anarchy of those moments: everyone could bring their own verses, but they also had to bring at least one poem of a great poet of history. This was a way for people, especially young people, to discover the greatness of the many great poets who illuminated history, that we should never forget.

The most extraordinary thing, even in the frame of a moment of great global difficulty, is that everyone showed themselves and every diversity ended up becoming the greatest wealth. Women, men, people of every gender, social and geographical origins, of any political, ideological or religious thought, celebrities and workers felt equal in the face of the transcendent power of Poetry. Poetry has shown us, more than any discourse could, how Art can reveal the truth of human beings, so different yet so extraordinarily equal.

Borges’ poem “The Just” taught us that even doing something as small as that we were saving the world.

For many weeks our daily Instagram live became a moment of beauty in days of fear and expectation.

Even the Italian media noticed it.

For me it was a collective performance, a perpetual chain of Poetry to illuminate that stretch of our path. Art, the word, has also become a tool for personal development, emotional management, goals management. Poetry has been for us, imprisoned in quarantine, a much more effective way to reach the truth of ourselves than many NLP courses.

So from that experience many dozens of people spurred me to create something more stable. And from there “Poetic Renaissance” sprouted, a poetic movement that in the following months immediately became the main network of poets in Italy, and then opened in the United States, Canada, Brazil, Turkey and other countries. A movement that has landed then in reality, organizing events throughout Italy and bringing together people who shared poetry in quarantine, and that could finally embrace others with the body. And with poetry.

At the end even a quarantine can be an interesting experience for those who want to see the world through the eyes of Poetry.

One of the many poems I shared during the first quarantine

I miss a lawn,
feet on the grass,
scent of truth rising from the ground,
sun of life kissing my cheeks.
I only have four walls and a long wait.
All it takes is one verse
gushing from the heart
straight to the heart
and all the lawns of the world,
and the scents, and the sun and the truth
they sprout inside me.
And there is no more ‘here’ and ‘now’
there is only ‘everywhere’ and ‘always’. 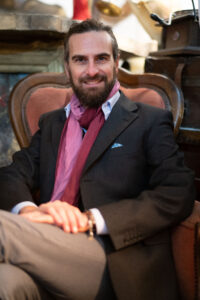 Paolo Gambi is the founder of “Poetry Renaissance”. A former university lecturer in Italy, Malta and Switzerland and an award-winning journalist, he left everything to focus on his research as an artist, writer and poet. His poetry hybridizes with visual art, music, theater, and technology. Author of over 30 books, he received numerous international awards. His artistic research revolves around the word in its relationship with mystery, psyche and technology. His effort is to bring poetry into new spaces and new languages. He performs bodypainting poetry. He is one of the first in the world to have minted NFT poems.