In the middle of the desert, there was this city called Xanadu, where caravans halted for trading and rest. There, this story got repeated over dinners, by a master storyteller, in the best oral traditions of the East. A storyteller who was once a regular traveller and had seen most of the known world and seen many marvelous things in Persia, Egypt, Greece and Spain. His rich voice and style of narration attracted the merchants who would eat and drink in his food shop and listen to his mesmerizing stories in order to unwind after a hectic day haggling and selling in the crowded bazaar. Many nationalities assembled there for exchange of goods and pubs and coffeehouses were the nightly destinations for the sellers and buyers alike—the latter as meeting joints where even the strangers exchanged stories that bordered on the marvelous.

Over the years, Xanadu had become a top centre of commerce on the trading route that connected the East with the West. A busy hub where you can find everything you wanted—animals, birds, slaves, spices, cloths, weapons and mercenaries for hire.

Many merchants stayed on for weeks together till their stocks exhausted and formed relationships with the locals, whores, judges and court officials.

Storytelling was the dominant mode of entertainment. There were clowns, jesters, circus animals, acrobats, palm readers and arm wrestlers.

The most popular was the master storyteller and his repertoire of stories that he called experiences and observations. His shop was huge and on clear nights, he moved audiences to the outer courtyard, where he would sit and make the stories come alive through voice, gestures and facial expressions.

The story that grew phenomenally popular was the staple of the evening recitations—and the first demand by the clients reclining on mats and stools. It was called Un-caging.

The master storyteller from Istanbul said it was his favorite one also.

So, there was this traveling merchant who brought exotic items in his caravan to the fabulous city of Xanadu. Once he brought a chimp and a giant slave as two most unusual things not seen in that part of the world.

“The chimp can talk.”

“The giant can wrestle with the chimp.”

The onlookers emitted a collective gasp.

The merchant charged a big amount for showing these feats to a wild audience and often challenged the adventurous to wrestle with the chimp or the giant—or both—for hundred gold coins. If the challenger lost, he had to pay the double.

Nobody took this challenge.

In the heat of the long desert day, both the primate and the human would be kept outside his large tent, as two live exhibits to attract more crowds in the afternoons and early nights—kind of advertising of the wares that included many animals and slaves and freaks. The collection of the mixed commodities was termed as The Wonders of the World by the owner, a short man with a huge paunch and bald head, who was hated by the staff and the prized items, humans and animals alike.

The hot sun made the life of the chimp and giant hell. Both would gnash teeth and roar and shake their iron cages violently—to the utter delight of the blood-thirsty crowds that would spit and pelt stones at the two cages, only to be chased by the dogs and slaves of the owner. If any fellow slave or outsider tried to give them water or meals, they would be whipped by the merchant and his personal bodyguards.

One afternoon it was extremely hot and the chimp and the giant were howling in rage, ready to break out from their burning cages. But nobody cared. Onlookers stood passively and enjoyed the scene…till… .

“Till?” asked the listeners in one voice.

“Till,” said the master storyteller, “a man in white robes appeared magically from out of that shimmering heat and…”

The crowd and the city, too, went into the lockdown, due to the sudden plague that descended on Xanadu, like swarms of locusts, forcing everybody inside their houses that turned into prisons they could not escape.

The story teller gave a long pause and surveyed the courtyard full of flushed but eager faces. He kept on scanning the horizon for something, while his cats prowled around his broad feet.

Then, having built up sufficient tension, the tall, lanky man from Istanbul, clad in red robes and a white turban, resumed telling the story:

The man’s robes flew around him like wide balloons. His bearded face was radiating peace and happiness and eyes were kind.

“Why caged these creatures of a merciful God?” he asked in a baritone that echoed across the desert.

The merchant looked haughtily at the majestic figure, “Go your way, dervish.”
“It is my way that leads me here only, son,” he replied serenely.

The chimp fell quiet, while the giant pleaded, “Release me, O, holy Man, from my daily prison and this inhuman torture.”

The dervish smiled and gestured.

The giant too grew quiet.

A big and cool cloud appeared in the scalding sky and cast a soft shadow that brought instant relief from oppressive heat to the unfortunate prisoners.

“Go some other way, mendicant and stop meddling in others legitimate affairs.” The merchant growled. “And I have no patience left for those who run away from the problems of the world. Go away.”

“And if not?” the mendicant said smilingly, not offended by the bluster.

“In that case, my dogs and slaves would tear you apart. Save your remaining life, before I change my mind, beggar!”

“Release these children of a compassionate God. Show mercy to them,” The holy man commanded the arrogant merchant.

“No, I will not. Do whatever you can do. I own them. My property.” The merchant said angrily.

“Fine. You do not listen to saner voice, merchant. You will understand their plight, only when you suffer like them,” he said and gestured in the air.

The merchant was behind the cage, while the duo was free, in a jiffy!

“Plague be upon this city for their cruelty!” He said and vanished in a trailing cloud.

They were left speechless.

The words came true of the wandering mendicant soon.

The crowd and the city, too, went into the lockdown, due to the sudden plague that descended on Xanadu, like swarms of locusts, forcing everybody inside their houses that turned into prisons they could not escape.

Finally, after weeks of daily torture and confinement, the young daughter of the merchant sought out the dervish in the desert.

“Please forgive the sinners, holy soul!” she pleaded with him.

The Fakir took pity on the woman and said, “Ask your father to repent and become holy.”

“How? You are a truly holy man, not everybody can become you on his own will,” the daughter said.

“Everybody can become holy—through words and matching actions,” he revealed. “Remember, very few are born holy. Others can become holy through their choices.”

“That might take time, O, Pious One! Please release my father and the city from their imprisonment, as there are innocent children and women also. I promise to make the men change from bad to good,” she said and cried at his feet.

“To each, his own conclusion to a story that is not a story, yet a story.”

Moved by compassion, the Fakir said, “Get up, child! I grant you your wish. They will become free, if they and your father…”

At this point, the story teller became silent.

“Yes?” the listeners asked. “What happened next?”

The master narrator said nothing for a long time and then: “To each, his own conclusion to a story that is not a story, yet a story.”

The pandemic is still on. It is partial unlocking.

Corona is news. People find comfort in talking to each other on phones, reading, painting, singing and online communication within groups of their liking.

The tourists enjoy the coffee in the Café, while observing the social distancing.

The master storyteller is there, red-robed and turbaned, reclined against the wall, his cats around his feet.

Gypsy music is playing in this port city of the East, now in a slow revival.

The tourists are all curious about the story called Un-caging.

“Please finish the story,” says a portly man. “What happens next?”

The master storyteller says softly, “As rightly said by my ancestor there in Xanadu, each guy must find their own meaning and supply their own ending to this tale that is not a tale, yet a tale.”

“OK. Fine!” says the portly man. “I run the digital Istanbul Daily. I will feature the most interesting ending in its Sunday edition.”

The storyteller smiles. “Free dinner for this author and the editor and all the present listeners.”

They become animated, the assembly of listeners. Not much to do in a city limping back from the plague.

They huddle together. And come up with multiple conclusions.

Some say the merchant left everything and went into the desert in order to pray and seek forgiveness.

Others say, he followed the dervish everywhere, till the holy man relented and took him on as his faithful disciple.

Or, in another ending, he went mad and kept on roaming the street, hit by the urchins there.

Or, in some other version, a more cruel, cursing, cussing and bitter guy, planning revenge, once free from the cage nobody could open due to the spell/curse of a hurt holy soul.

The most fantastic ending was this one:

I am the young woman who was the merchant daughter in the earlier account. I had seen it then and see it now. I persuaded father—and the city—to repent by an act of un-caging their animals, birds, servants and slaves forever—and thus, un-caging an entire city and finally, freeing their real selves, from grand  illusions of ownership and domination and power, over fellow beings who are the creation of a merciful God, their real lord!

They are still debating such an ending among themselves there.

What do you say, dear reader/listener to this tale that was not a tale, yet a tale?

On this wet hour, in a corner stands the young vendor: right hand holds

a veined left hand, eyes expectant, face gaunt, on the

eve of the Independence Day of the largest democracy, his own country.

Few meters away, three workers, lean-thin, drenched in the rain that never stops for a minute, try hard to fill up the trenches and craters on the street that has sprung alive, after weeks of hibernation and isolation, enforced by a grim lockdown;

Huddled together down the street, a mother-son pair sells the greens from a stall, under a long plastic sheet, while auto-rickshaws wait for the fares, drivers wait patiently nearby; all the faces masked, stoics of different degrees.

Shops are open, hawkers move around.

of the existential threats posed by COVID-19

here, there, everywhere, across the world, liberated and bold 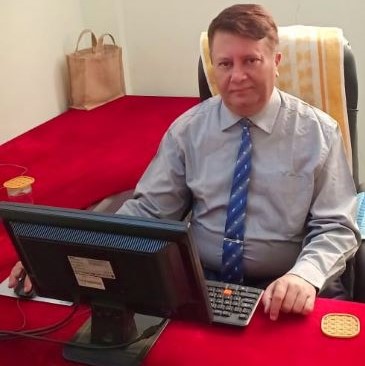 Sunil Sharma, a senior academic and author-freelance journalist from the suburban Mumbai, India. He has published 22 books so far, some solo and joint. He edits Setu.