The Night I Got Out

My last night in the Navy

and there was a big party

Forty of us slammed together

Three double scotch on the rocks

the Chief said to down them

I did so he handed me a tankard

Chug-a-lug he said til you see through

I did and he gave me three more

double scotch on the rocks

That’s all I remembered but the

next morning I was ex-Navy

My Parents Have Their Arms Around Each Other

in the picture taken

something I do not

my mother’s head is

two youths in a romantic

it was never in the eyes

their smiles were thin in

that photo, yet more than

they had for me because

they never had it for each

other and did not know how

yet that picture shows as I

rarely saw them – together

not arguing, with a moment

of happiness that I was

Lester Bildorp was fascinated with magic. When he heard Gelfman The Magician was going to perform at the New Town Theatre he begged his parents to take him.  He begged and begged until they could not stand the begging anymore and agreed to take him to see Gelfman The Magician at the New Town Theatre. He wanted to see rabbits pulled from a hat, a lady sawed in half and handkerchiefs turned into doves that flew around the theatre and return to the magician’s hand turned back into a handkerchief.

On that special day the family took a taxi to the theatre, bought tickets for the third row and settled in comfortably. Soon Gelfman The Magician appeared on stage to applause and cheers. He performed the requisite magic Lester expected: a rabbit pulled from Gelman’s hat, a red handkerchief turned into a dove and back to a handkerchief and the beautiful blonde sawed in half and put back together.

Then Gelfman The Magician announced, “Tonight, for the first time anywhere, here in the New Town Theatre I am going to perform magic that has never been attempted anywhere.” The audience oohed and ahhed with expectation. They shouted, clapped and stomped their feet. “I will need one or two volunteers”. The theatre went silent. No one spoke up. Lester looked at his parents and begged them to go up, “You just have to, for me.”

Gelfman heard Lester and implored the Bildorp parents to come onstage. He guaranteed them the thrill of a lifetime and said their son would be extra proud of them. Lester looked at them with wide pleading eyes.  His lips formed the word please.  So the Bildorps agreed and alighted to the stage where Gelfman The Magician stood with arms spread wide

“Ladies and gentlemen,” Gelfman announced, “today you are about to see the single most exciting act of magic ever performed live on a stage before an audience of so many people.”

With that he opened a large box on the stage and motioned for the Bildorps to enter. He then closed the box and he and his assistant placed a large red sheet over it. He recited some incantations learned in India. Then he took one end of the red sheet while his assistant took the other end and together they removed the sheet.   Gelfman opened the box and showed that it was empty.

“ But where are my parents?” Lester Bildorp asked.

“Well, I’m not sure, Gelfman,” The Magician said.  “I said I’d make them disappear but I never figured out how to make them return.”

Okay so we have a fight over some silly thing, not unusual for two people used to fighting. So I go to the florist and buy a dozen newly guillotined tulips to give her, which she throws on the floor crushing them as if she were doing a Mexican Hat Dance or perhaps a Flamenco Dance, heels clomping on the linoleum floor. That gets me thinking about Louis XVI’s last thoughts as the executioner ties his hands behind his back and places his head in the U-shaped slot. All the while crowds cheer like at a modern day rock concert waiting for the blade to snap his neck in two. The executioner pulls the cord sounding the scrape of metal on metal as the blade whirs its way down. Louis XVI thinks merde. The people yell hooray, common people celebrating the joy of liberty. They love the demise of the elite and raise their hands to God.  Louis XVI’s head is now in a basket while his blood flows and the crimson tide of French royalty soaks the stage and the crowd cheers. Meanwhile she in the kitchen tramples my pride and apology then orders me to clean up the mess she made. So I wonder who cleans up after Louis XVI, who takes the head from the basket and places it back with its royal owner?

Freedom Is Not Just Another Word

Pigs are reported to be the smartest of barnyard animals and female pigs smarter than the males. So, it makes sense that a 280-pound sow being transported to the slaughterhouse would work her way out of the back of a trailer transporting it to a future as a platter of bacon or as the ham centerpiece of the family dinner, perhaps a few chops or somewhere in hash.

This sow bobbed and weaved her way through backyards like a star running back, eluding her captors and then the police, who like the Canadian Mounties wanted to prove they could get their – ah – pig. Finally, the corpulent porker ran out of strength, her legs wobbly, her grunts deeper, she just lay down and when roped like a cow she squealed like the pig she was dragged back to her inevitable fate, learning a lesson rock and roll fans have never learned: freedom is not just another word, and there is always something left to lose.

They have been cleaning the Charles River for umpteen years now. They say you can swim in it, but were dredging for years finding goose poop by the tons. You can see fifty or more geese and goslings swimming at one time. When they eat, they poop.

A few ducks here and there on the river really do not matter, but geese are protected and no one knows why. You cannot use a gun, bow and arrow or sling shot. If you do the goose protection police will get you.

Of course the same folks who protect the geese could be reporting on the muggers who are out there mugging lovers as they stroll. Or they could report the rapist who is dragging some poor girl into the bushes to prove his power and rage. No one calls the people police to rescue any victim who dares walk or jog along the Charles River even in broad daylight.

If you really think it is safe to go swimming in the Charles River where the HMS Somerset was anchored on April 18, 1775, think again. Back then the river is much wider and swimming is probably a fun sport to the colonials and British. It is filled in to build houses. Then sewer systems are added that empties into the venerable river. All sorts of sand and dirt and tools are heaved into the Charles along with sewage so that two hundred years later it is filthy and polluted. So polluted, in fact, that a song is written about it, so polluted only catfish and bad bacteria can survive.

If you go sailing all these years after the British warship patrol the river and fall in the river you need a tetanus shot to protect against disease. So now they – whomever they are – say it is safe to swim again but if you cannot drink it, would you swim in it? 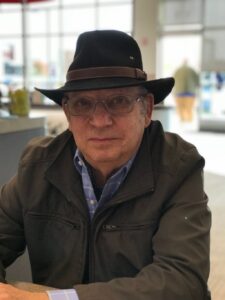 Zvi A. Sesling, Brookline, MA Poet Laureate (2017-2020), has published numerous poems and flash fiction. He edits Muddy River Poetry Review. His work has won international prizes and nominated for local and national awards. He is a five-time Pushcart Prize nominee. He has published four volumes of poetry, King of the Jungle, Fire Tongue, The Lynching of Leo Frank and War Zones and three poetry chapbooks, Simple Game, Baseball Poems; Love Poems From Hell and Across Stones of Bad Dreams. His flash fiction book is Secret Behind The Gate. He lives in Brookline, MA with his wife Susan J. Dechter.