Look to this day. In it lie all the realities and verities of existence, the bliss of growth, the splendor of action, the glory of power. Sanskrit Proverb

2020 has been the strangest of years I knew in my lifetime. Many of us would like to erase this year from our lives. First, the COVID 19 pandemic crisis has reshaped the world in many ways – our society, government, healthcare, economy, lifestyles, and family relationships have all been affected. It has impacted not one region or one country, but its calamities are worldwide.
Second, George Floyd’s death on Memorial Day has reignited the call for equality, not only in America but also worldwide. George Floyd’s death was a cruel reminder that Black people in this country continue to be “crippled by the manacle of segregation and the chain of discrimination,” as Martin Luther King stated in his speech, I Have a Dream.
As if these were not enough, natural and other calamities – locust swarms, earthquakes, floods, landslides, fire, smog, volcano eruption, beheading in France, and of course the election stress in the USA have kept everyone at the edge of their seats, waiting for what is next.
Some good also happened in my life – the long-awaited birth of my granddaughter — she brings such joys in our lives! My grandson’s first year in college reminds us that life goes on. The happenings of 2020 have filled me with a myriad of emotions – sadness, helplessness, rage, contemplation, reverence for God, acceptance, joy (for some good that happened in my life), and sometimes with humor. I have tried to capture these emotions in my writings and art.

Here, in this green and quiet place
I give myself to peace and rest

As my vessel sails through the stormy, tumultuous
waves of life I stretch my wings to reach Thee
In a silent prayer
Please guide me,
To conquer the clamorous journey ahead
With astute knowledge and strength
Then,
Endow upon me the peace and calm
As flows in the heart of the ocean.
(published in Confluence UK, May 2020)

Nature hummed a silent song,
Towering trees in harmony recited the Vedas,
Foliage beneath listened as attentive disciples
Quaint wooden steps, and a still boat –
Ah! What a congruent mixture of life –
All waiting in hushed silence,
Then, and then The Sun,
peaks through its pink, orange, blue blanket –
The start of a New Day,
Showering many blessings,
and life dances
to a new rhythm.
(previously published in Conflunce UK, 2019, resubmitted to Yearbook Book of Indian Poetry Anthology in October 2020)

God is the Color of Water

Who am I?
My confused eight-year-old reasoning,
muddled with fear, knew no bounds.
Is my mother really my mother?
Then, why is she different?
Searching, finding, lost at times,
my body and mind infused with orchestrated chaos,
I looked into the layers of my life’s scanty pages —
find an answer, open a mystery –
I asked with anxiety and disquiet nervousness,
“Are you my real mother?”
“Yes, child!” you replied.
“Then, why am I different?”
You calmed my soul,
“We are all human beings,
and God’s creation!
In our differences, we have similarities.”
“What color is God?” I asked.
You replied, “God is the color of Water!”
“But water has no color –
why did God put different colors in making us?”
My curiosity grew.
You smiled and took hold of my hand,
“God is an artist. The canvas of the world is enormous –
He filled it with different colors to make it look beautiful.”
I smiled, I looked at myself, and I looked at my mother in the mirror –
yes, we were different, yet we were the same —
both our hearts full of love.
Up above, and far away, God smiled
through a vast stretch of a rainbow —
shining different colors.
(published in Setu Bilingual Journal, September 2020)

A Cry in Vain

“Mamma”
A last, despair, heart-quenching sound,
As the soul escaped the helpless, strangled body,
Yes, “Perry, my child” a mother from heaven felt his pain —
The pain of a helpless forty-six-year-old son,
The pain of a father of two young children,
The pain of many oppressed.
All for a fake twenty-dollar bill?

Those crucial eight-minutes
George Floyd, “Perry” for his mother and aunt
Made history
Ignited the flame –
EQUALITY
(published in Confluence UK, August 2020)

Let There be no Black or White

Life is sketched in black or white,
A story is penned –
Birth to the last breath,
With ink on white,
Colors fill the in-between spaces –
They smear and erase,
Footprints remain,
Let there be no black or white!
(published in Confluence UK, August 2020)

In my solitude,
I reflect on what life holds,
Each page a mystery,
Not knowing,
The next chapter,
I learn, I reflect
How the story weaves!

May the Melody of Love and Peace Capture the World

(This poem is a tribute to Mahatma Gandhi for his birth anniversary on October 2nd. The world called him Mahatma or the Great Soul and revered his passive nonviolent philosophy).

The world stood still, stunned with pain,
three shots on that calamitous day —
a nonviolent fighter against the violence,
Bapu, the Father of the Nation, a saint, was no more.

This small-statured, half-naked-fakir, a giant among men,
who traversed the road of Ahimsa, Equality, Peace, and Truth,
stood tall like a Banyon tree taking the world under the shade of his canopy.
His principles relive through many —
Martin Luther King, Nelson Mandela, Dalai Lama, Aung San Sui.

Gandhi, a messiah of humanity, we need you. Our earth is in chains.
Manacles of pandemic and endemic scourges threaten our world.
Racial injustice, crime, violence, greed, poverty, religious and political crisis
made holes in the fabrics of our lives.
Let your charkha knit a virtual tapestry of harmony.

May the melody of Love and Peace capture the world.

The Banyon Tree is considered India’s national tree, known for its strength, vigor, and vitality. Its roots can penetrate harsh surfaces like concrete and stones. The tree rejuvenates itself through its branches.

(Published in Setu October 2020 issue. There was an audio presentation of this poem for Setu).

There is a sanctuary in my house

There is a sanctuary in my house —
A small temple with rustic terracotta and silver deities
I worship.
It occupies a small corner of my house
but carries within it protonic energy
to illuminate my life, my being, my small world.
It spreads a canopy
under which I feel safe and secure.

There is a connectivity between me and the deities within it.
When my thoughts weave a tangled web,
the deities I worship are like my father, who holds my hand
and untangles my worries.
When I am tired and sick,
they are my mother’s soft touch to give me warmth.
When I am happy,
they are like my friends, my brothers, sisters
with whom I can share my joy.

I feel their presence within me with every drop of my tears I shed,
with every gratitude, I hold in my heart.
Their benevolent eyes guide, encourage, soothe me.
I feel their stretched hands as in blessing over my head.

How can I deny the presence of this sanctuary
in a little corner of my house?
(submitted to be published in an anthology in November 2020)

Considering the present situation, I was asked to present something from Bhagwat Gita to a group of people. I presented Gita Chapter 11, Shlok 36 on November 16, 2020

This shlok is a eulogy to the Lord. Arjun addresses Lord Krishna as Hrishikesh, meaning the one who controls minds, consciousness, and senses. His power is infinite. He has a great love for His devotees. The whole universe takes delight in glorifying Him – all the saints bow down in love and adoration. But, the terrifying demons, discouraged and dismayed, flee. The word Sthane means most appropriate – only the worthiest devotees are fortunate to enjoy His astounding powers.

Arise, Shine for your light has come,
And the glory of God has risen upon you
For behold, darkness will cover the earth,
And deep darken the people
But the Lord will arise upon you
And the glory will appear upon you.

We are hoping and praying that soon, the threat of a pandemic and many ailments of the world be over, and we will be able to resume our regular lives.

In these quarantined days, connections with our loved ones are now limited to zoom calls and facebooks – we celebrate Diwali, Bhai Dooj, birthdays all through from the glass screens of our computers or cell phones. Meeting friends and families has become a thing of the past, yet we do not know when this trauma would be over. What can we do?
To get over this isolation, I try to appease myself with happy memories, conversing with nature, art, and writing – any positive thoughts help in these dreary times. Here is a piece I wrote:

After a severe storm, it had just stopped raining. The sun was fighting its way through some grayish looking clouds. I stepped out on my deck and stretched myself leisurely on a comfortable chair. Sometimes, I enjoy these hours of solitude. Trees glistened with the freshness of a child after a shower. They danced slowly with the symphonic rhythm of the breeze. The waves in the pond played hide-and-seek with each other. It was peaceful and quiet. The only sound was the sound of nature.

The whole canvas of the sky overstretched above me like an awning. I was intrigued by the vaporous mixture of steam, rain, sunshine, and clouds making numerous designs. When I was young, my sisters and I would have a contest to contrive more stories from those roaming clouds. I was a winner once when I pointed out that the sky was the ceiling of the Sistine Chapel, and there were figures of the man, half lying, and God was leaning towards him with his arms stretched. Both my sisters agreed that they both saw the two figures. I was the winner. For me, it was ice cream that day, for which both my sisters had to pitch in their pocket money to buy. The ice-cream vendor person passed by every day through the neighborhood chiming his bell and singing, “Ice-cream happy days!”

So many years have gone by since those days. Time does not wait for anyone. The old memories brought nostalgia and a tinge of pain. So much has changed since then. I lost my younger sister to cancer, who was like a sister and a friend to me. The good old sky was still there, and the clouds still sketched different patterns. As I looked up, a rainbow beamed in its distinct seven colors. The sun behind the clouds gave me its silvery wink. Was this a message that soon, the dark shadows of our lives would disperse, and a renewed sun would shine through our lives? 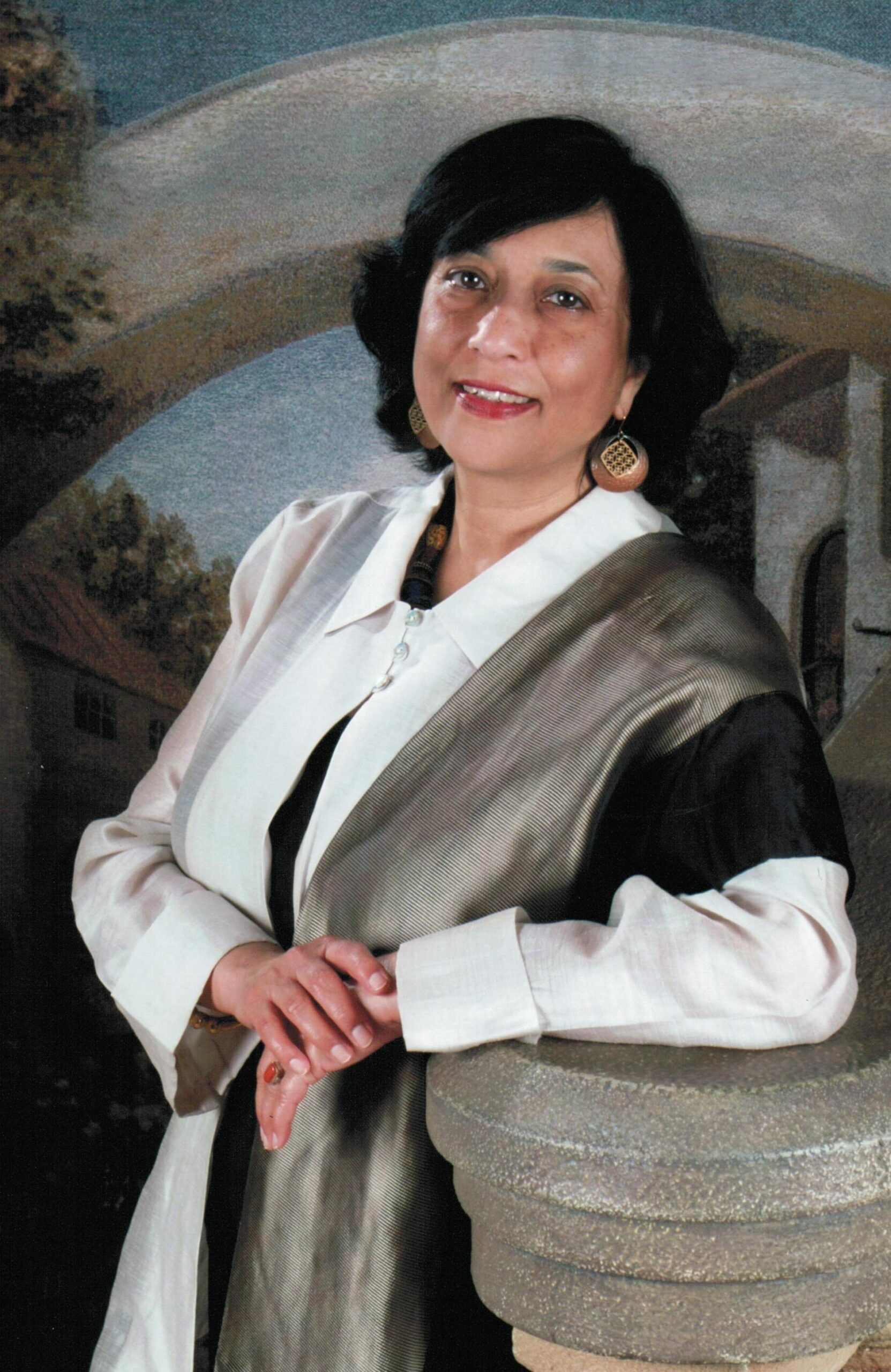 Meenakshi Mohan, Ed.D. Dr. Meenakshi Mohan is a scholar, writer, and artist. She has taught at universities in Chicago, Boston, and Towson University in Maryland. She is on the Editorial Team for Inquiry in Education, a peer-reviewed journal published by National Louis University, Chicago, Illinois. Meenakshi lives in Maryland, USA.